Street (The chinks in the armor) 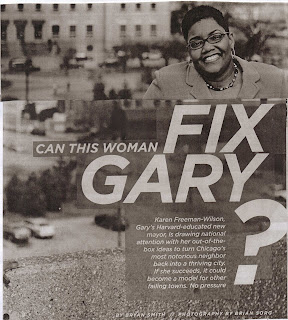 The "Chicago Magazine" did a long story on the new mayor  of Gary, Indiana in April of 2012. Naturally, they referenced her being the First African American woman to be elected Mayor of Gary , Indiana (2011). This to me was during the period of Mayor Wilson  is "Honeymoon". The date today is 2.23.13, and that "Honeymoon" is over now in Gary, Indiana.

The article referenced Delvert Cole who was in a high school marching band with her(now her deputy mayor). It also mentioned Tom Collins, CEO of Luke Oil in Hobart, Indiana. There was a big deal of him earning a dollar a year working for Mayor Wilson of Gary, Indiana. His job was to get Chicago Firms to buy into the notion that Gary is a good place to do business. That's why it was tough  for me to fathom both of the aforementioned Freeman-Wilson of Gary, Indiana. 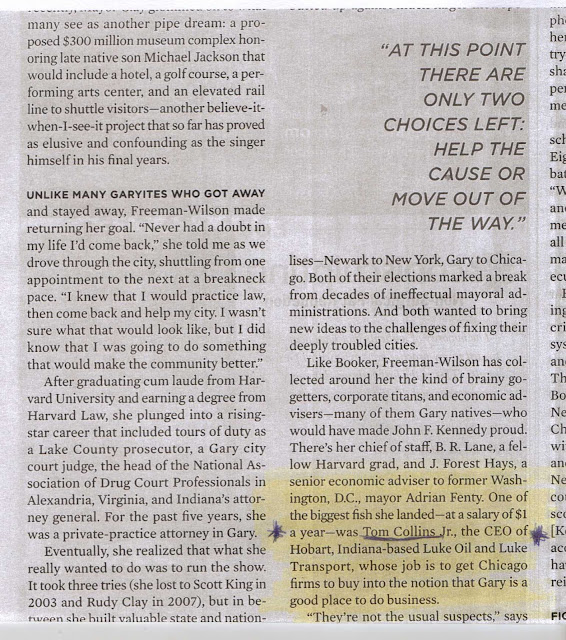 Tom Collins needed to dig into his pocket and help develop one new businesses in Gary, Indiana. Hit a "home run" and let other business in Chicago know one thing. "Come on in, the water's fine." "Lil baby can talk."

This was done, and now Tom Collins is like "Hank Harrellson"  says on the radio. "He gone!" A  little bay can talk... these folks for Missouri, you got to show them!!!
﻿

Posted by fromthestreet.net at 4:31 PM