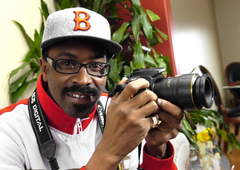 This guy, Jerome Lynch, is all over the social media using the term allegations. Mr. Lynch is referring to the stolen camera at the Genesis Center in which he is the center of attention. He also claimed that he took Times' photograph camera by mistake. In reality, there is a witness who had seen Mr. Lynch leave the Genesis with two cameras.
The part that irks me if this theft would have been committed by a “young guy” wearing baggy pants that was hanging down low on “his behind”. They would have “put cuffs” on him... and the Fireman(Mr. Lynch) had on his fireman's uniform with his pants “pulled up”
There are sources who have said that Mr. Lynch actually had taken the camera home. On the phone, he was convinced that he was on the video surveillance tape, and he would be in deep trouble. The camera was returned to “top brass” of the Gary Fire Department Fire House.
Posted by fromthestreet.net at 11:27 AM