“The news is what people don’t want you to know… all the rest is advertisement.” It was like this “cat” spoke to me. Source told me this story about her and her husband, Jeff Kumorek… Seems as though Pat Collander was on the Editorial Board of “The Times” and oversee the magazine section of the newspaper… Street took mental notes… Jeff Kumorek was appointed Warden of Lake County jail by Sheriff John Buncich… The appointment came with a “caveat”. The Times would handle Sheriff Buncich with a pair of kid gloves. No negative stories on Sheriff Department.
Sources had noticed that Kumorek had trouble with the bottle… He ultimately got fired for arriving to a crime scene drunk. Source made his point.  The source better than “government check”.  But these allegations merited a “update”. Lake County Sheriff Ray Dominguez had Rich James at the Post Tribune who “handle handled him with a pair of kid gloves”. ie.; no negative stories on Sheriff Dominguez. Linda James worked for the Lake County Drug Alliance Task Force, etc. Sheriff Dominguez controlled this whole thing, you feel me.

“Civility Counts” is all P.R. and fake news is not the problem. Covering up news like Mark Kiesling having problem with the “bottle” is 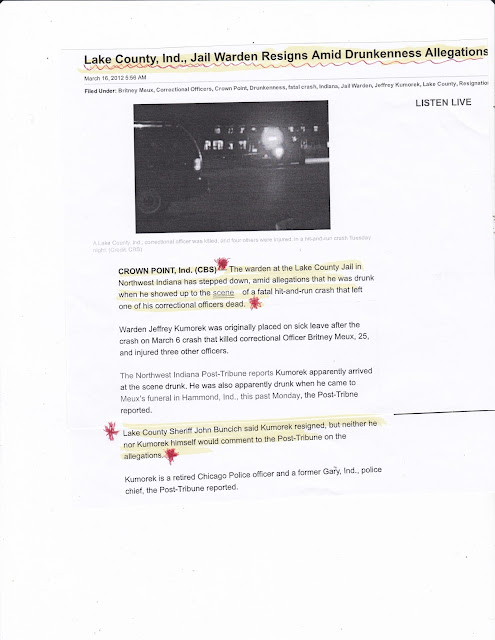 Posted by fromthestreet.net at 8:20 PM